How Are Lawyers and Small Law Firms Using Technology? 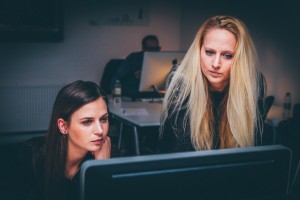 Solo and small firm lawyers often find it difficult to compete with larger legal organisations in terms of resources and costs. But thanks to the increasing accessibility and affordability of technology, the playing field is being levelled all the time.

The latest software packages are helping lawyers and law firms to network digitally with more prospects than ever before. In addition, technology is helping smaller organisations to reduce their costs — allowing them to compete with larger, more established firms on service and price. Stated simply: building a client base and developing a reputation within the legal industry is easier and cheaper than ever before.

The huge advantages associated with the use of law firm technology are clear. And according to the statistics, solo and small law firms are embracing the latest developments in hardware and software in order to improve efficiency, profitability and client satisfaction. The results of the 2016 ILTA/InsideLegal Technology Purchasing Survey are out, and they demonstrate just how important the use of technology is to lawyers right now.

This year’s survey includes data from law firms of all sizes and reputations, but the responses from solo and small firms were particularly interesting. When asked about their expenditure on technology in 2016, 39% of respondents said they planned to increase it. And on the top of most shopping lists was Cloud computing solutions.

Cloud computing benefits law firms in a number of ways

Most established law firms have already made significant improvements to their technology infrastructure during the last decade. But one area of business tech that is still growing at an astonishing rate is Cloud computing, and there are several reasons why.

While larger firms tend to take the relatively cautious approach of implementing Cloud-based systems for individual applications, a growing number of new and small firms are basing their entire operation in the Cloud. And why are they doing this? Firms see a great opportunity to take advantage of emerging technologies such as analytics, AI, mobile solutions and automation.

In an increasingly competitive and crowded marketplace, competing with large and established law firms is becoming more and more difficult. By making the switch to Cloud-based services such as IPzen, solo operators and small firms can increase their client base without increasing their cost base. The efficiencies and operational advantages delivered by Cloud-based solutions can be achieved without the significant outlay physical IT systems require. It is therefore easy to see why 61% of small firm lawyers indicated that more than half their firm’s services would be based in the Cloud within three years.

Globalisation and the need for flexible working are now part and parcel of the modern World. By making files, documents and data universally available to those who need it, law firms can operate anywhere in the world with a reliable Internet connection. Data stored centrally in accessible file formats makes remote working and remote collaboration easy. This was evident from the survey results, which revealed that 34% of respondents had purchased Cloud storage within the last year. And 25% said they would be investing in Cloud storage during the next 12 months — up from 16% last year.

Case management software such as IPzen is helping law firms to streamline their operations, reduce costs and deliver a more complete service to their clients. And according to the survey, the use of such software is on the rise. In 2016, 12% of respondents revealed that their firms had bought a case management software system during the previous 12 months. In addition, 10% said their law firm will be making such an investment over the course of the next year — compared with just 8% the year before.

As well as making case management more efficient — thus more profitable — IPzen takes control of billing too. And according to the survey, this is growing increasingly important for law firms. Remote time entry was implemented in 16% of the law firms questioned in 2016. Moreover, 18% of respondents said that their firm would be implementing such a system in the coming year.

The move towards paperless operations continues

It seems that an increasing number of law firms are moving towards paperless operations. The survey revealed that small operations in particular are keen to embrace paperless technology wherever possible. The results revealed that 47% of all technology purchases made over the last year were for scanning and imaging equipment. The ability to create a virtual filing system in the Cloud — which can be accessed from anywhere in the World — is why IPzen is particularly popular with small and medium-sized law firms.

Small and solo law firms simply don’t have the resources to hire full-time, salaried IT staff. So issues such as security and system updates need to be planned very carefully. The automated security updates and virus protection offered by Cloud-based law firm management tools such as IPzen take the element of chance away from what is a crucial facet of managing any IT system. The survey demonstrates just how important this is to law firms, as it revealed that 45% of all purchases during the past year were related to antivirus and antispam software.

IPzen is a Cloud-based suite of tools designed to help law firms streamline their operation, grow their bottom line and improve customer satisfaction.

Safe, secure and user-friendly, IPzen has been developed by lawyers for lawyers. But if you want to see proof, contact us today for a free, no-obligation online demonstration of this powerful law firm management system in action.

Our site uses cookies to offer you the best service and to produce statistics, and measure the website's audience. You can change your preferences at any time by clicking on the "Customise my choices" section.
Accept AllReject AllCookie Settings
Manage consent

The cookies associated with our Website are intended to store only information relating to your navigation on the Website. This information can be directly read or modified during your subsequent visits and searches on the Website.
Necessary Always Enabled

Analytical cookies are used to understand how visitors interact with the website. These cookies help provide information on metrics the number of visitors, bounce rate, traffic source, etc.

Ipzen is concerned about protecting your privacy and the Personal Data (“Data”; “Personal Data”) it collects and processes for you. Hence, Ipzen complies every day with the European Union legislation regarding Data protection and particularly the European General Data Protection Regulation Number 2016/679 of 27 April 2016 (GDPR). This Privacy Policy is aimed at informing you clearly and comprehensively about how Ipzen, as Data Controller, collects and uses your Personal Data. In addition, the purpose of this Policy is to inform you about the means at your disposal to control this use and exercise your rights related to the said processing, collection and use of your Personal Data. This Privacy Policy describes how Ipzen collects and processes your Personal Data. The collection happens when you visit our Website, when you exchange with Ipzen by e-mail or post, when exercising our Intellectual Property Attorney and representative roles, when we interact with our clients and fellow practitioners, or on any other occasion when you provide your Personal Data to Ipzen, in particular when you register for our professional events.