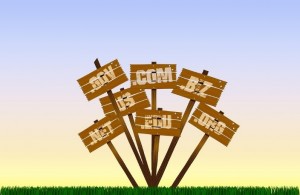 At the end of 2016, the Afnic, the French Registry, made a report concerning the market of domain names in the world. Thus, since 2014, more than a thousand new  gTLDs arrived on the market, in the image of the famous “dotbrand”(.brand), and its flourishing success. In fact, in 2011 and under the push of ICANN, the “New gTLDs” appeared in order to promote innovation, but also to promote competition between companies. On the other hand, the launch of new waves of TLDs also helped to establish the rise of speculation, making the market unstable and shattering its structure.

The Internet registry for domain names in France (Afnic) details the power relations between new gTLDs and ccTLDs, maintained by the incessant evolution of the domain name market. Indeed, while the market was dominated by ccTLDs (official country TLDs) and gTLDs, the arrival of the new gTLDs challenged the market structure.

It is important to note that the world market for domain names represented about 338 billion domain names at the end of 2016: 169 million gTLDs, 28 million new gTLDs, and 141 million ccTLDs. The Afnic generally observes a decline in attractiveness for the 6 major so-called “historical” TLDs (“.com”, “.biz”, “.info”, “.mobi”, “.net” and “.org”). It however notes that the promotion and reopening of certain TLDs such as the “.pro” allowed the latter to progress. Others, such TLD as the “.mobi”, are in decline (-5%).

While new gTLDs show a 7-point growth in volume, historical TLD lose one to two points. However, this decline is to be relativized with regard to the “.com” which still represents 39% of the total global domains. It alone counts 131 million of websites!

The Afnic believes that the ccTLD category remains stable. Indeed, Europe still has a 49.2% of the world’s ccTLD stock. Geographically, the push is given by African, North American and Asia-Pacific countries.

8% of the total domain names in 2016 incorporates a new gTLD. The “.xyz”, widely known by specialized services in domain names, dominates the category of new gTLDs garnering to itself 6.7 million domains, an increase of 275%.

But the new gTLDs do not simply consist of this TLD: there are indeed others, which are lesser known, such as the “.club”, “.loan”, “.site”, “.online”. In total, there are no fewer than 1200 new gTLDs.

Speculation seems to be there for many: the “domainers” register huge quantities of domain names, without necessarily exploiting them thereafter, and often as soon as the TLDs are released, the idea being to raise prices and then resell them to the highest bidders. As a result, the new gTLDs suffer from the low lack of renewal. For example, the Afnic was able to note that only one “.xyz” is retained out of two, even though the stock has been tripled.

Four large families of new gTLDs exist: community, geographic, generic and “corp” (linked to private structures). After the “.xyz”, the second most widely used category is the geographic TLDs. The other two categories are declining, they have a very low attractiveness since their launch (especially the “corp”).

The financing of the sector and speculation linked to ambitious strategies of large companies are also important factors that explain this structure and instability. Indeed, for the Afnic, the market is less and less predictable since 2014 with the arrival of new gTLDs. The willingness of actors to diversify their sources of income, but also to carry out strategies of integration within the value chain, can explain why the market is experiencing such a mutation. For example, the Afnic noticed that due to huge deletions, the “Chinese regsitrations” lead the market and weigh on the growth of some TLDs.

The Afnic therefore concludes that “newcomers are more fragile, but also more agile, and one of their greatest challenges is to succeed in seducing investors while preserving their ability to innovate without aiming for immediate profitability”. To be followed.

IPzen protects and defends your brands and domain names

IPzen is THE solution that facilitates the management of your brand portfolio but also your domain name portfolio. Manage your brands as well as your domain names thanks to its different modules. These modules are adapted in a way that allows you to have access to detailed information on each registered title/name, a general overview of the protection status of a sign, and again to an automatic time calculation function. IPzen also takes care of the registration or renewal of a brand or domain name by guiding you step by step. But still, watch for domain names that can spoof your brand in all possible TLDs, including non-Latin characters.

The management of your intellectual property rights has never been so simple!