Why are the Napoleon trademarks so successful in terms of intellectual property? 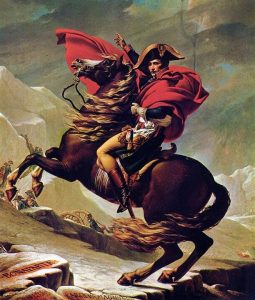 Napoleon is one of the most famous figures in the history of the world. No wonder the legendary name is used for many trademarks.

On the occasion of the bicentenary of Napoleon’s death on May 5, 2021, the German Patent and Trademark Office lists the many German, European or international trademarks that use Napoleon’s name or names associated with it: Bonaparte, Joséphine, Austerlitz, Waterloo.

The image of Napoleon and the hat on his head is still going around the world.

What types of trademarks use the name “Napoleon”?

Napoleon is a name often given to alcoholic beverages.

Indeed, the word mark “Napoleon” is registered for French absinthe or beer, in the variant “NAPOLEON’S LAST LUXURY” also other alcoholic beverages. The Belgian beer brand “IMPERI ALE NAPOLEON” is based on a play on words.

Bonaparte is also registered as a word mark for French wines, and the Office rejected the application for “Chateau de Napoleon” for non-alcoholic beverages.  However, there is a word mark for a Napoleon mineral well. In addition, various brands of “alcoholic” word images such as Grand Champagne Napoléon, Napoléon Cognac Fine Champagne, Champagne Grand Napoléon have been registered. The location of Napoleon’s most significant victory, Austerlitz, was also registered as trademarks of alcoholic beverages. Thirty-one trademarks currently bear the name of the site of its worst defeat, Waterloo, including a Belgian beer.

Besides alcohol, the confectionery is often decorated with the name of the great general.

A well-known chocolatier has obtained “Napoleon” as a word trademark for stuffed chocolate from France. There is also a trademark of the same name for candies. Another type of candies is marketed under “Napoleon Energy”. And finally, a Bulgarian pastry shop advertises its products with “Napoleon – The Emperor’s Choice!”.

In addition, there are several trademarks of smoke and tobacco products bearing Napoleon’s name.

An expensive barbecue maker has the same name as well as a supplier of sightseeing tours to Elba, where Napoleon lived in exile for a while in 1814 before experiencing Waterloo on a return attempt.

At the time of the commemorations for the bicentenary, the emperor remains an icon.

How to effectively manage your trademark portfolio?

With IPzen, log into our platform simply using a username and password, without the need for special software or operating systems. You will have immediate access to all stages of the procedure for your trademarks, including official titles.

Don’t waste your time looking for specific information about a case. IPzen is here to make your job easier. Organize each file with our integration tools and find your information in just a few clicks.

The trademark portfolio management system has been designed to be efficient and secure to adapt to your technical needs. IPzen is one of the best management software available on the market for intellectual property professionals.