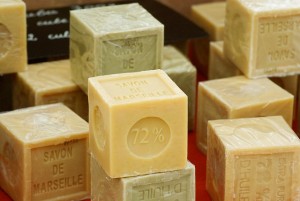 The ‘Court of Appeal of Paris, in  a judgment on April 12, 2016, decided to validate the famous trademark “Le Petit Marseillais” for soaps in Class 3, and condemned the owner of the trademark “Le P’tit Zef” for counte
rfeit.

The validity of the trademark “Le Petit Marseillais”

Indeed, “Le P’tit Zef”  attempted to defend itself by arguing that the trademark “Le Petit Marseillais”  seemed to be a soap from Marseille without actually being one. Article L. 711-3 of the French Intellectual Property Code states that: “Signs liable to mislead the public, particularly as regards the nature, quality or geographical origin of the goods or services may not be adopted as a trademark or an element of a trademark”.

The Court of Appeal of Paris notes that the trademark “Le Petit Marseillais” refers to a soap from Marseille in the consumer’s mind. Moreover, the latter’s goods and services actually refer to the soaps from Marseille in the Provence region. However, the company “Le P’tit Zef”  highlighted in this case that the products were not originally from Provence but from the Côte d’Or region.

The Court of Appeal thus had to assess whether the company owner of the trademark “Le Petit Marseillais”  had committed fraud by registering the trademark sign as such.

The judges held that in this case, there was no risk of confusion or error for the public. Indeed, the case outlines that: “According to the page of the online encyclopedia Wikipedia which contributed to the discussions, the term “savon de Marseille” is not a term designating protection of origin, but simply relates to a manufacturing process approved in March 2003 by the DGCCRF.”  Therefore, soaps from another country can claim to qualify as “savon de Marseille” as long as the manufacturing process includes a saponification system.

The Court goes on to state that “the designation “le petit marseillais”  cited by the three disputed trademarks cannot, in the eyes of the public, point to the geographical origin of the goods covered by these trademarks, given public awareness on the products’ nature.”

Thus having justified its decision with reference to Wikipedia, which may seem surprising, the Court found that “le Petit Marseillais”  was not misleading. However, it is not certain that the majority of consumers are
aware of the origin of the appellation “savon de Marseille”.

Having found that the trademark “Le Petit Marseillais”  was valid, the Court of Appeal of Paris had to rule on whether the trademark “Le P’tit Zef” had copied the above.
By way of a decision on March 25, 2014, the commercial chamber of the Cour de cassation highlighted the fundamental principle according to which trademark infringement and the likelihood of confusion are assessed in relation to their overall similarity.

Indeed, the European Court has outlined on several occasions that the average consumer views a trademark as a whole and does not scrutinise its various details.

Hence, the judges should base their decisions on the overall impression created by these trademarks visually, aurally or conceptually, taking into account their distinctive and dominant features.

The overall form of a trademark as well as the wording are indeed assessed visually. The trademarks can be confusing aurally for a consumer who does not see both signs at the same time.

It is undeniable that there are common factors between the two trademark signs, whether in terms of  its imagery or its wording. The opposing trademarks indeed bear a strong similarity. The words “Le Petit” and “Le P’tit”  are similar.

However, from a global visual and aural appraisal of the two trademarks, one might conclude that “Marseille” and “Zef” are sufficiently different to reject any likelihood of confusion.

Finally, the Court analysed the conceptual aspect of the trademarks’ perception. In fact, distinctinve trademarks can be conceptually mistaken since the consumer who would have the first trademark in mind, would then associate it with the second one.

The Court of Appeal considered the appellation “p’tit zef” as a variation of a Breton expression meaning “le vent de chez nous” and referring particularly to a person originating from the city of Brest. The disputed trademark signs then represent, for the jugdes, “strong conceptual similarities, each referring to a child originating from a major French port city: Marseille for the earlier trademark and Brest for the other trademarks.”

The Court of Appeal has decided here not to refer to the reputation which might be attributed to the trademark “Le Petit Marseillais” in order to describe the likelihood of confusion, which might seem surprising.

Furthermore, the analysis made by the judges is akin to that of the validity of protecting such trademarks, this however not being an aspect which can be protected. In order not to lose what has already been achieved, the court considered the possibility of trademark variation, instead of proceeding more accurately by associating points of similarity and concluding with an overall assessment.

Moreover, the court’s reasoning with respect to its assessment of consumer knowledge may be surprising. On the one hand, the court held that consumers are capable of knowing that the statement “savon de Marseille” does not imply that the products originate exclusively from Marseille but rather, that they refer to the manufacturing process and on the other hand, held that the consumers cannot differentiate between the two signs.

However, the judges are determined to condemn the owner of the trademark “Le P’tit Zef” for trademark infringement because of the likelihood of confusion between the two trademark signs.

This is an interesting ruling which confers a particularly wide scope for the protection of trademark rights.